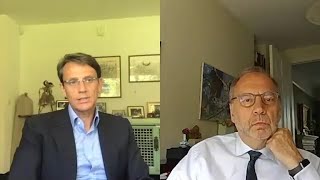 Peter Piot co-discovered the Ebola virus at the age of 27 and went on to conduct pioneering research on HIV/AIDS – achievements that would see him dubbed "the Mick Jagger of microbes" by the Financial Times and a 2014 Person of the Year (as one of the "Ebola Fighters") by TIME magazine. Now Director of the London School of Hygiene & Tropical Medicine and a Handa Professor of Global Health, he was recently named a special adviser to the President of the European Commission on research and innovation for COVID-19.

COVID-19 news: where experts look for the latest information

"Besides the epidemic of a virus, we have truly an epidemic of information, and a lot of it is not useful," Professor Piot warned attendees. "Frankly, it’s garbage, it’s even fake news."

However, he added, there are a number of sources that in his view are reliable and authoritative, each with its own particular strengths. For daily global updates, for example, he recommended the websites of Johns Hopkins University in Baltimore, US, and the World Health Organisation.

For more specific questions, such as "Does hydroxychloroquine really work to prevent or treat COVID-19?", "you’ve got to dive into more medical information," he suggested, such as the New England Journal of Medicine. And for epidemiological information and modelling he recommended his own institution, the London School of Hygiene & Tropical Medicine.

With many governments using strong measures to contain the spread of the virus, Professor Piot saw some grounds for optimism. "What I think will happen probably is that we will see a decline in new infections as a result of all these measures," he said. "[The virus] will probably come back in waves, like we had 100 years ago with the Spanish flu, but the good news is that there’s now massive investment in science, in innovation and technology. I think the real exit strategy is going to be one that’s driven by science and innovation."

He expressed doubt that an effective vaccine would be widely available by the end of 2020. "This is a vaccine that will have to be given to billions of people," he said. "So, we can’t afford that they have side effects that would cause harm." Even if everything went smoothly in the development of the vaccine and clinical trials, it would take an unprecedented manufacturing effort to produce billions of doses.

Moreover, we don't know how effective such a vaccine would be. The annual flu jab received by many people only protects around 40–60%, he pointed out. A COVID-19 vaccine, while very helpful, "will not eliminate the virus," he said. "So, we will have to think of how societies can live with this new microbe."

It is therapeutics, Professor Piot argued, that will produce faster results. "Why? Because, they’re easier to produce in general – they are small molecules or they're monoclonal, they're antibodies. There are big trials going on and, at the European level, there is a lot of collaboration between countries." The drug Remdesivir, he said, was also showing promising results.

"We probably need different types of therapies – those that knock out the virus and those that also deal with the hyperimmune response," he said. Nevertheless, he added, "I would say in four to five months we should have a very good armoury of therapies which then can be refined."

Commenting on the governmental approach to tackling the COVID-19 crisis, Professor Piot praised the European Union for its pluralism. "Nobody has ever faced this kind of threat so we’re all learning while we’re sailing," he acknowledged. "But I think this diversity is, in the end, going to tell us which [approaches] are more effective than others."

However, he said, "at the political, bureaucratic level, health is not a competency of the European Union," and it will need to become a core competency if future epidemic threats are to be dealt with swiftly.

The next big threat on the horizon, he added, was the summer holiday season. "For countries around the Mediterranean, [cross-border tourism] is their livelihood," he said, "so making that safe is going to be really, really key. And that’s where Europe has to play a role through the European Commission."

The opportunity presented by COVID-19, Professor Piot suggested, was that it would encourage governments around the world to develop the infrastructure necessary to watch for, prevent and mitigate future outbreaks of new viruses. “You don’t set up a fire brigade on the day your house catches fire," he concluded. "It has to be ready all the time.”

For more information on our Experts Talk series, please speak with your relationship manager. Or follow the link below for the latest insights from our CIO team on the impact of the COVID-19 crisis.